By Robin StoddardJanuary 16, 2019Connect to Others, Discover Jesus, Missions Trips, Serve the Community

Day three started with a french toast and sausage breakfast. I’ve never had french toast like this, but it was fantastic! Following breakfast Sharon shared devotions with us, reminding us to feed ourselves with good thoughts, habits, and actions and not to feed our with fear and negativity. She ‘threw us a bone’ of truth to take with us for the day:

“Now to him who is able to do immeasurably more than all we ask or imagine, according to his power that is at work within us,”  Ephesians 3:20.

Off to work we go… 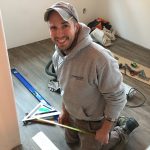 We headed out to the job site with rain in the forecast. The shingles arrived late to our site so the guys started with siding instead.Ralph and myself were inside mudding Sheetrock for the day. Patti was helping clean up the outside yard and pick up nails from the the day before. Steve found another critter today – he was the lucky discoverer of the first Texas snake. So glad it wasn’t me.

At lunchtime Christina, Laura, and Tami stopped by to take us out to a delicious Mexican restaurant. They took a ferry to the area we were working, after spending the morning visiting with a homeowner whose home is just about ready to move back into. She had gotten electricity back last week and the gas was being turned on today. The team here continues to periodically check in with homeowners after their homes are complete. As we were getting ready to leave the restaurant, another woman who’s home the team had built was coming in and she stopped to chat. Shortly after lunch the rain arrived, so even though the shingles had arrived, the team spent the rest of the day inside preparing the walls for texture and paint.

The other team spent the day painting, siding, and flooring. The home they’re working on should be mostly completed this week, which will be pretty exciting to see. Jane taught the team there to tie their shoes! Apparently Jane knows a double knot method that the rest of us don’t. 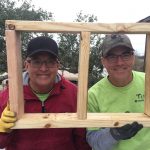 Dinner was roast chicken and mashed potatoes tonight. As everyone was wrapping up eating, a gentleman from the church here named Rick stopped in to say thank you to us. We echoed thanks to him and this generous church for all they do. He laughed and couldn’t believe we would thank him when we were the ones that had traveled all this way to work for a week. He’s been so touched by all the people coming down the past year and a half. Volunteers from all over the country are visiting, teenagers spending their summers, and others changing their lives to work for others. We feel equally touched that this church has been so faithful. Staying the course and letting strangers sleep here every week and invade their church. It’s such a blessing when God’s people unite to help each other.

Rick also told us a bit about the hurricane. He shared that typically the people here see hurricanes as a good thing. They swoop in for five hours, dump a bunch of rain, and move on. They pour rain on the farmer’s fields, fill the lakes, cleanse the bays, and put people to work. I’m guessing that’s why so many people chose to stay and wait it out. They’ve been through so many of these, but Rick said none were like this one. This storm came in, went out, come back in, went sideways, and came back in again. It stayed over the area for an entire week, dumping 20 plus inches of rain every day in the areas that our teams are working. The winds got up to 180 miles per hour. This was not the storm anyone here was expecting. 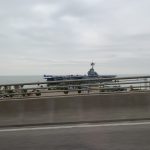 We also learned some interesting things about the area here including that the “Texas stop sign” is the Dairy Queen. Plus, a lot of the movie Pearl Harbor was filmed here. They have an old aircraft carrier in the harbor here – the Lexington. Many of the scenes were filmed there and in one instance they painted the ship to look like a Japanese ship, which angered some of the local veterans.

My favorite thing so far this week is seeing Dean every morning at our house. I can imagine how he must be wondering why these strangers would come all the way from Minnesota to work on his house. I pray that by the end of the week he knows it’s because God loves him. Fun fact – if you have Sheetrock mudding to do at your house – don’t invite me to help. I’ve discovered I don’t have the knack for it! 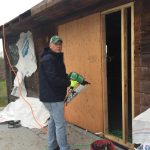 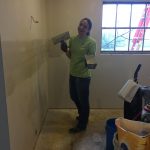 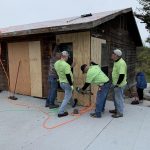 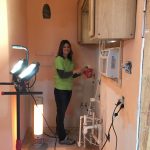 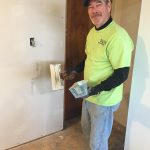 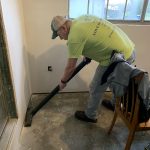 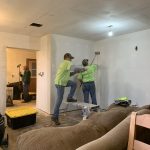 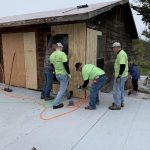 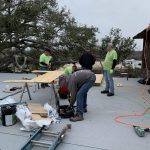 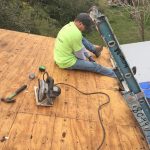 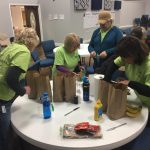 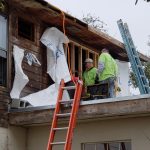