By Robin StoddardJanuary 17, 2019Connect to Others, Discover Jesus, Missions Trips, Serve the Community 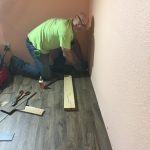 Paul installing the last board of the new floor! It looks fantastic!

Last night the teams from both churches stayed up playing Catch Phrase. We had a great time, especially the ladies, who won most of the rounds. We have enjoyed meeting the Lindstrom team so much this week. This morning was the first warm morning we’ve had. The sky was overcast again but the rain held off until almost 4 p.m.

We accomplished a lot at all of the job sites today. Roofs and floors were completed, painting and siding had significant progress, walls were finished and ready for paint, and we had tons of satisfaction for completing those tasks. I could tell our homeowner was very excited as well. Excited seeing things being completed and happy to be able to pick out a paint color!

Today I’ve heard so much about what ReachGlobal means to the people they serve. Laura and Tami went on home visits again today and Laura shared with me the story of Diane. Diane said every day that the volunteers were at her house meant so much to her. She also said that when they were done with her house, she missed them. She missed her prayer partners and loves how ReachGlobal continues to come back and visit and pray with her now that her house is complete. 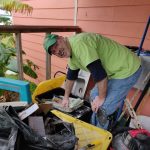 The homeowner at my site shared pictures with me drawn by the children of the last team of volunteers who came to work on his house. He’s saving them in a plastic shoe box sitting on his kitchen table. That team gave him a hammer with a Bible verse on it that he plans to hang up on the wall once the home’s complete. It made me sad that I didn’t have a gift to give him. If there are any first-time mission trippers out there, that’s a great thing to think of bringing with you, little gifts for those you meet.

Bringing a community of support to those who need it

Jane spent a lot of time with the homeowner at her site today. She moved to the area after her mom had died – about a year before the storm. After the storm hit, she lost her brother. She’s had so much loss in such short time. Being in Texas for such a short time before the storm means she hasn’t had much of a chance to build a community of support. Jane sensed she just really needed someone to talk to, and I have no doubt Jane was a blessing to her today. 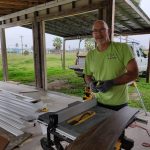 Tonight was ‘share night’ at the church. All the volunteers, staff, homeowners, and church members were invited. A member of the church made some aMAZing authentic Mexican food! One of the homeowners came and she again echoed how much these people, the volunteers, and this organization mean to her. She talked about how after the hurricane, she didn’t see any of her friends for so long because they were all cleaning up and rebuilding their own homes. The volunteers became her friends, prayer partners, community, and gave her the strength to keep going. She said God is so much more a part of her life now than it was before the storm.

Having a magical time 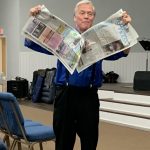 The Lindstrom team has a professional magician in their group. He’s a missionary magician and travels the world sharing the gospel through magic. We had the pleasure of getting to see his show tonight. Ralph and I got asked to volunteer. After the show, we went around the room and shared how God was working in our lives this week. This is such a fantastic organization. It’s been such a blessing to so many people; volunteers, staff and homeowners. 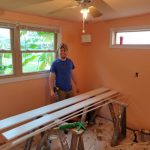 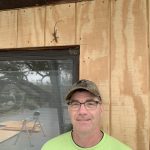 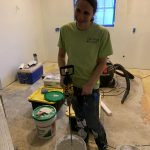 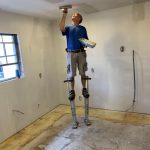 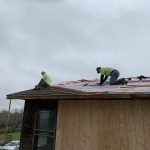 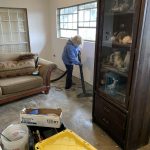 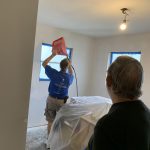 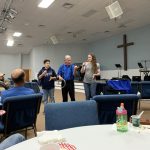 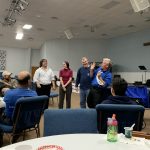 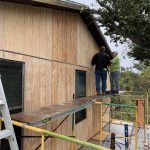 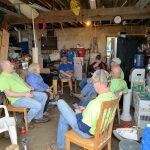