The Power of Prayer: Part One

Gabriella Leadens was getting ready for work when she got the call, her blood test had come back positive. There might be something wrong with her baby. Even now she can still recall her doctor trying to reassure her.

“I had a quad screen test, which was basically testing for spina bifida, and it came back positive. My doctor told me ‘a lot of these tests can be false positive.’ So I kept trying to tell myself that’s what it was. After the call I was a mess. I was crying, and I called my husband, I was supposed to be at work in 20 minutes.”

Gabriella didn’t make it to work. She didn’t sleep either. She couldn’t do anything but think of that ‘positive’ test looming over her baby.

“The next day I told my doctor, ‘I need an ultrasound tomorrow. I need to figure out what’s going on.’”

Gabriella and her husband Briggs Leadens got the ultrasound, it was the first time they heard the term gastroschisis; but it wouldn’t be the last.

“They looked her up and down and found out everything was good, besides the fact that she had gastroschisis. They briefly told us what it was, they said, ‘there’s an opening in the abdominal wall,’ and then they said, “in the state of Minnesota you have up to 24 weeks to abort,’ and in that moment all I could think was, ‘Oh my God…’”

With just one word, the future of Briggs and Gabriella’s baby was suddenly rocky. That afternoon Gabriella says she was a mess.

“The whole ride home I was in the car losing it. Our parents came over, and they were trying to console us. And we really shouldn’t have, but we Googled ‘gastroschisis’ and saw all the horror stories… that was really bad. Then I decided to call my doctor and she set us up to meet a neonatal surgeon.”

After days of getting bad news, Gabriella and Briggs scheduled yet another appointment and made the trip to the University of Minnesota Masonic Children’s Hospital in Minneapolis.

The right people at the right time. 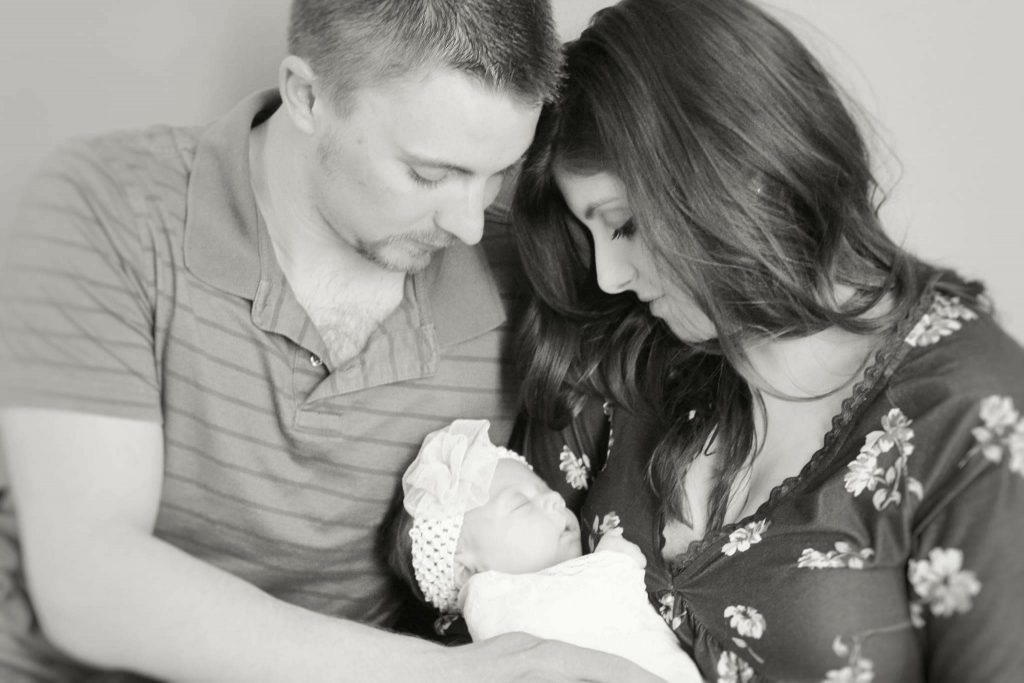 “The surgeon put us at ease. I still thank God for getting us to the right people to find out more about this defect. We both walked out of that appointment with a sigh of relief. He [the surgeon] was sitting back in his chair like, ‘oh yeah, I see this all the time,’ so I was like, ‘okay, he seemed pretty cool about it, so it’s fine.’”

Even though the surgeon had eased some of their worries, Briggs and Gabriella still had to decide whether they were going to continue the pregnancy, and they had less than 8 weeks.

“I never, ever thought I would be someone that would get an abortion. But I was so concerned about what her quality of life would be. It was so hard. Every day; it came up. Every single day. My husband and I would talk about it, then I would go and talk to my mom because I didn’t know what to do and we would just sit there and cry.”

They were also praying about it every day, and thanks to their family members, their church was praying for them too.

“Penny, my  mother-in -law, contacted Pastor Dave the day we found out and briefly told him what was happening. So he started praying, and told a prayer group and staff, so there were a bunch of people praying over us.” After weeks of prayer, research, and talks with their loved ones, they decided to go through with the pregnancy.

“I’m really happy we went through with the pregnancy, I still look at her and then I look at Briggs and I’m like, ‘imagine if we didn’t keep her. To think that we weren’t going to. And now she’s perfect, you couldn’t even tell that she had anything wrong with her.’”

“The Power of Prayer” is an incredible testimony from the Leadens family, and the real events that took place during their daughter Delaney’s first months of life. This will be a three-part blog series. Part two will be posted on Thursday, January 31 and part three will go up on Thursday, February 7.